Wednesday, 24 November 2021, saw Security Forward Risk & Intelligence Forum meet face-to-face at the Guildhall. This was our second gathering outside the world of video-conferencing. The meeting was chaired by Peter Fraser-Hopewell CMB MBE. The main speaker was Crispin Black who, as ever, gave a fascinating and insightful talk around France its position in the world and Europe, with a glance into the future.

"Elle a perdu un empire et n'a pas encore trouvé de rôle." In a speech to cadets at West Point in December 1962, former US Secretary of State Dean Acheson (in)famously said this of Great Britain (in English). Is it becoming true of today's France, and what might it mean for the UK? Crispin opened by challenging us to locate Clipperton Island, a French possession off the coast of Mexico, and ponder its territorial importance on the seas. Below is a map of French territorial possessions across the globe. Clipperton Island is too small to be included. 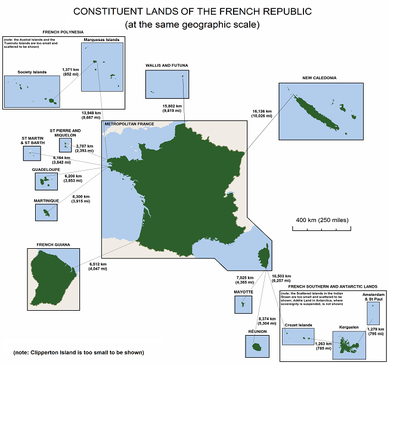 Crispin, although clearly, deeply, Francophile, painted a helter-skelter picture of recent French history from the sacrifices of the French Army at Verdun, through the humiliations of the Occupation, to the glories of France’s extraordinary post-war economic/technological expansion, and the recovery of her status in the world. With Germany divided and ashamed and the United Kingdom never fully committed to the EEC, France in the 1970s and 80s bestrode Western Europe like a colossus. But this status was in some ways artificial because from 1945-1990 Germany was unable to convert the results of the Wirtschaftswunder into international power and influence. Even after re-unification in 1990 the German elite felt for many years psychologically restrained, still in some senses under the suzerainty of France.

All that is now long gone. What Berlin wants Berlin gets. And it is the French, especially the professional political class, who feel this most keenly. While the population has remained indifferent or unconcerned about the UK’s departure from the EU, the elite has taken it personally, awakening a long-standing and partially dormant Anglophobia, encouraged by President Macron who faces a difficult re-election bid in April 2022. Interestingly, despite public rows, as eagerly pursued in the UK as in France, intelligence and military co-operation remains strong.

Macron remains favourite to win the presidential election next year and his likely opponent at the moment for the second round, the right-wing journalist Éric Zemmour, isn’t a fan of the British either. But if Macron wins a second term the most likely outcome will be a general improvement in relations with the UK as he puts his insecurities behind him. If Zemmour wins then relations are likely to improve more rapidly – he has repeatedly stated that he has no issue with Brexit, not because he approves or thinks that it was a sensible thing to do, because it was the result of a democratic process.

Whoever wins will have to forge a strong relationship with the new German chancellor, Olaf Scholz, to be inaugurated next week – a politician who will be restrained by fissures within his three-party coalition but of a very different kind from Frau Merkel. This task is likely to be the Élysée Palace’s top priority.

Looking to the future, there is a members' only meeting on Wednesday, 8 December 2021.