Locations ‑ Past and Present

We are currently based at 1 King William Street, just opposite Bank Station in the heart of the City. 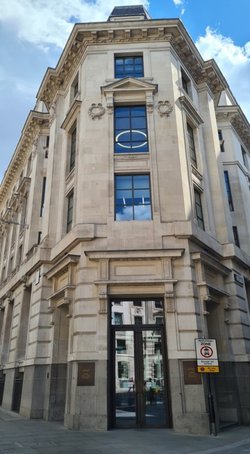 41 Lothbury was home to Z/Yen for 6 years. Lothbury runs east-west with traffic flow in both directions, from Gresham Street's junction with Moorgate to the west, and Bartholomew Lane's junction with Throgmorton Street to the east. Snippets from National Westminster Banks' official record, 41 Lothbury 1834-1984 follow. 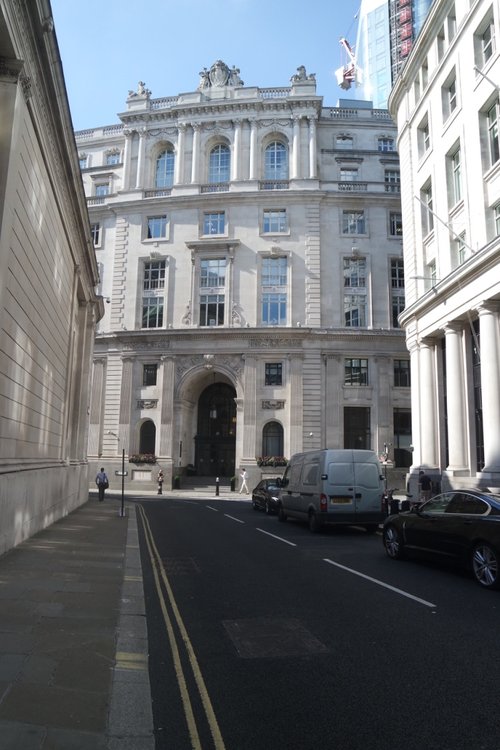 The place-name Lothbury was attributed by John Stow the 16th century antiquary to the 'loathsome' noise made by founders and others working in the street at that time. This picturesque theory is now discounted; the derivation is believed to be much earlier from 'lode' referring to the watercourse of the Wallbrook flowing to the Thames from Islington or, more probably according to Fairfield's 'Streets of London' 1983, from the 'burgh' or enclosed area belonging to Lotha's or Hlothere's people. Hlothere as a personal name was known in the 7th century. Certainly the Romans were in Lothbury, for remains were found at a depth of ten feet during rebuilding on the Bank site.

The area was then populated with coppersmiths in the Middle Ages before later becoming home to a number of merchants and bankers. Lothbury borders the Bank of England on the building's northern side, and some of Sir John Soane's work dating from 1788 can still be seen there today. Up from the office is our Christopher Wren church St Margaret Lothbury.

The story of 41 Lothbury begins in 1833 when William Robert Keith Douglas gathered a group of business associates to consider founding a joint stock bank in London. Joint stock banking had been allowed to develop in England and Wales since 1826 and legislation to allow it in London was still being contested. The Prospectus stated that 'the establishment shall be forthwith formed in the City; and for the accommodation of the Public a Branch Bank will be simultaneously established in the West End of the town'. On 10 March 1834 the doors opened to the public as the first joint stock bank in London, with its City Office at 38 Throgmorton Street (part of the present 41 Lothbury site).

With acquisitions of surrounding buildings two competitors bid for the work - Charles Cockerell, architect of the Dividend Warrant Office of the Bank of England, and William Tite, later designer of the Royal Exchange - eventually suggested that they should collaborate. Cockerell designed the facade in Portland Stone three floors high with a central doorway facing the Bank of England. The banking hall, 'square, domed and galleried with an immense beehive stove', was the work of Tite.

In 1866/7 the banking hall was further altered and the facade re-modelled and extended eastward. The main doorway was moved close to the position of the present one, facing up Bartholomew Lane. In its new form Lothbury remained substantially unchanged for 60 years.

The 1914-18 War saw many men from Lothbury serving in the forces and 44 died in action. The old building itself suffered damage one Saturday morning in July 1917 when in a surprise daylight raid the premises was bombed and the glass roof of 41 Lothbury showered down into the banking hall. 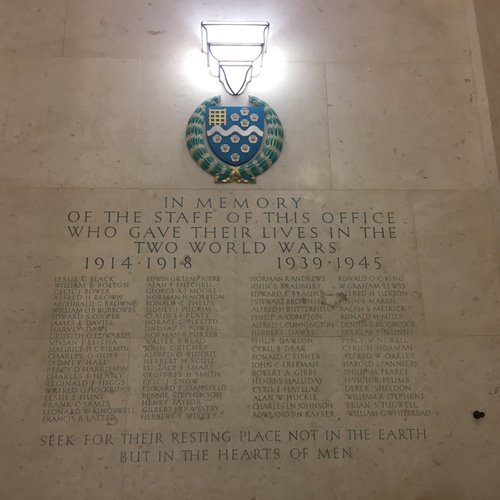 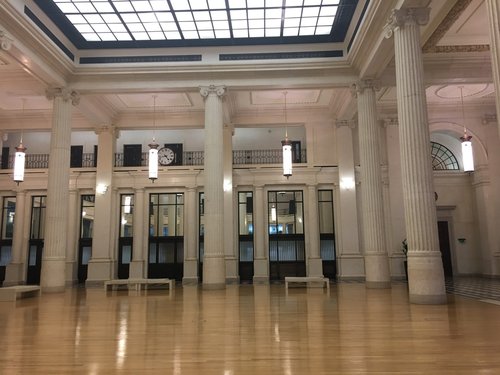 In 1923 it was decided that Lothbury should be completely rebuilt. The architects appointed were Mewes and Davis, whose other commission included 52 Threadneedle Street, which may be interestingly compared with Lothbury. With 43 Lothbury now vacant and with the purchase of other properties it became possible to build on a site stretching 240 feet from Tokenhouse Yard to Angel Court and 150 feet to the rear. Demolition and rebuilding were phased to allow transfer of offices into the new premises in stages and the new Lothbury was finally completed in February 1932.

Lothbury's men and women again played their part in the 1939-45 War, 36 losing their lives. As staff were demobilised they were welcomed back at Lothbury before returning to branches and departments.

Lothbury has always been one of the least obtrusive banking edifices in London, largely hidden behind the massive walls of the Bank of England. Yet the sudden view of its clean white front from Threadneedle Street, seen down Bartholomew Lane rather like a mountain at the head of a valley, is one of the most pleasurable architectural surprises of the City. Nor has it ever been simply an impersonal Head Office. At its heart has lain a bustling place where people have met. An historic place too, for it is where the first cheque was drawn on a joint stock bank in the City of London back 1834. For those of a parochial nature, Michael Mainelli had County Natwest as a client in the building back in 1986. 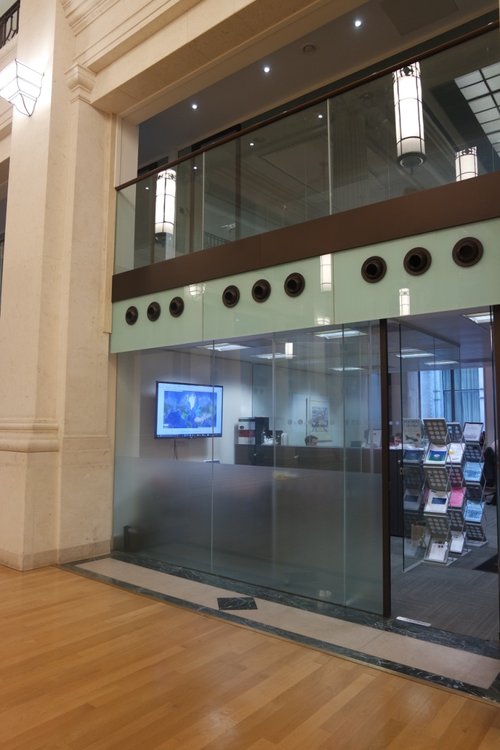 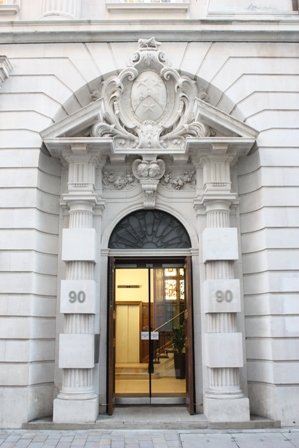 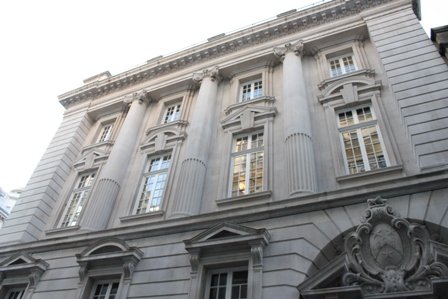 The 4th and 5th floors of yet another grand City building steeped in history, this time number 90 Basinghall Street and former Gresham College Building. (Eagle eyed visitors may notice the entwined G and C in the iron work on the balustrade up the stairs). 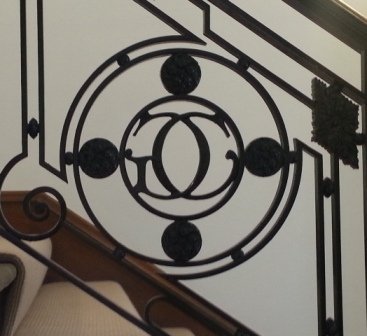 Gresham College has been providing free public lectures for over 400 years and is named after its founder Sir Thomas Gresham who was the son of Sir Richard Gresham, Lord Mayor in 1537/38. Sir Richard wanted to introduce an Exchange modelled on the Antwerp Bourse and it was his son Sir Thomas who realised the vision. 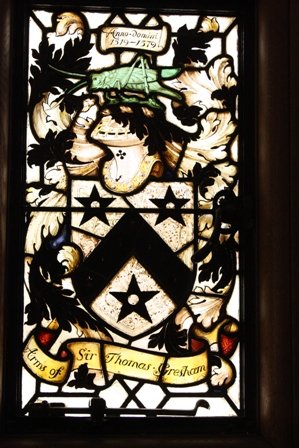 In 1842 Gresham college opened its purpose built college on the corner of Gresham Street and Basinghall Street at a cost of £7000. The college building comprised of lecture theatre, a library and other facilities. London’s appetite for learning was growing with speed and Gresham college often offered lectures in both Latin at 12:00 (providing there were more than 3 attendees) and in English at 13:00. The lecture theatre had seating for 204, plus 180 in the gallery. The number of people that the college facilities could hold shows simply how popular the free public lectures were. In 1908 the gallery was closed under fire officer guidance and the college was forced to extend, creating a larger venue to hold its ever growing number of lecture attendees. It was estimated that the extension cost £20,000 and could hold between 420-450. In 1912 the extension work was fixed in stone laid by the Master of the Mercers’ Company and the Chairman of the City Side; this was to demonstrate the equality of sponsorship. The stones are still visible today by the main door on Basinghall Street. 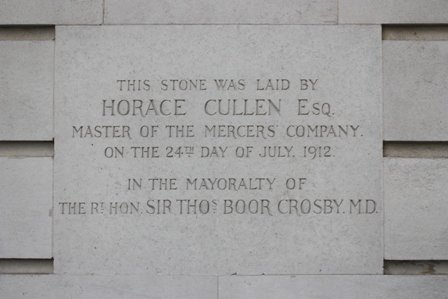 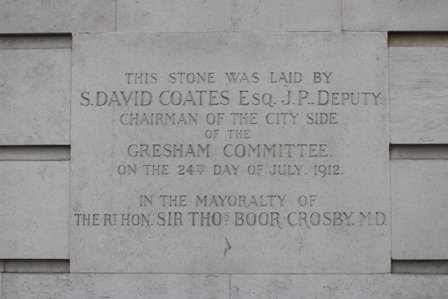 The Gresham College building we live in today was utilized during World War II. Lectures were dropped so that the hall could provide temporary office space for the Air Raid Disaster Department as well as police dances and concerts. It was recorded in September 1942 that 27,000 people had paid for concert admissions in the earlier three months. Happily, lectures resumed in the Autumn of 1946. In 1958 the Gresham library was moved from Gresham College to be housed at Guildhall where it remains today.

Gresham College moved its lectures to Islington thus allowing the Basinghall building to be rented out. In recent history 90 Basinghall Street was home to the Bank of New Zealand and, more recently to us at Z/Yen Group Limited, making floors 4 and 5 our own.

For 16 years Z/Yen’s happy home was the grand cul-de-sac of the St Helen’s Place EC3A 6AU owned by the Leathersellers' Company. 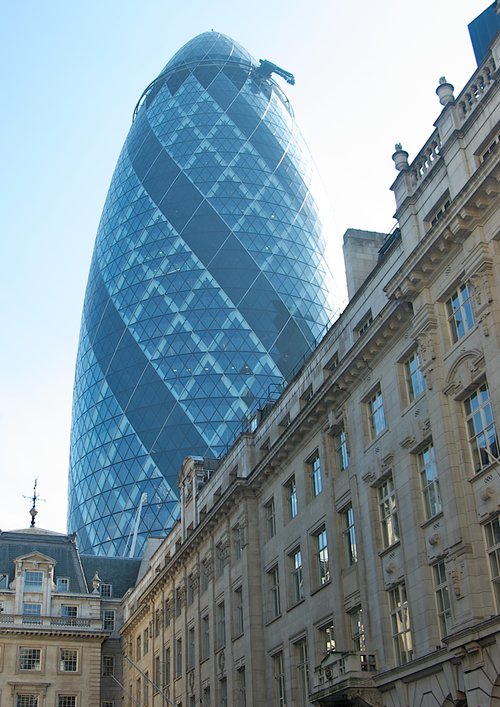 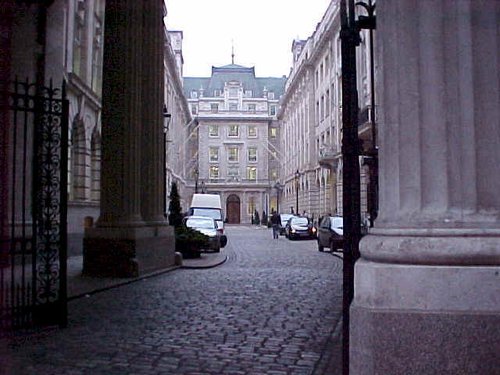 After working our way through several offices on several floors we decided to take up residency on the 1st floor at 5-7 St Helen’s Place in 2006 and made the place our own.

In 1549 The Leathersellers Company were striving for bigger and better surroundings and were fortunate to have the opportunity to purchase the former priory of the Benedictine nuns at St Helen’s Bishopsgate. This wealthy priory of St Helen’s was surrendered to Henry VIII in 1538 after unsuccessful attempts to bribe Thomas Cromwell. Fortunately, in 1543 the Leathersellers' Company was able to purchase the site once again, this time from Sir Richard Williams, Cromwell's nephew, using a large donation from John Hasilwood. In return the company began to build almshouses and John Hasilwood was able to lease the former Prioress's lodgings.

Luckily the Hall escaped unharmed during the Great Fire of 1666 although the Company’s other properties suffered and Court meetings were halted during the Plague. Nevertheless work continued transforming the former nuns' dormitory into the Great Banqueting Hall and social events thrived.

During the First World War St Helen’s Place played a key role transforming itself into a hospital and once the war was over work once again continued to remodel the Hall. During the evening of 10/11 May 1941 bombs were dropped and number 16 St Helen’s place along with the Hall were badly burnt. Adding salt to the wound, the River Thames was at low tide and without sufficient water the blaze continued into the morning.

In 1948 Louis de Soissons Partnership were appointed as consulting architects overseeing the rebuilding of the Hall but due to lack of men and materials in post-war Britain work was not completed until 1960. It was not until 1992 when yet another devastating blow hit St Helen’s Place as a terrorist bomb exploded in St Mary Axe. Repairs were still underway a year later when another explosion hit Bishopsgate and this time the Company decided to enhance the beauty of St Helen’s Place by repairing it using cobbles and York stone, flower tubs and Victorian-style lighting. To mark the year 2000 the company commissioned two bronze sculptures of a ram and roebuck to flank the entrance to Leathersellers' Hall.

Work began again in 2011 to regenerate St Helen’s Place and as the construction men moved in, Z/Yen Group moved out to 90 Basinghall Street, located in the Ward of Cheap. We dearly miss being able to look out from our kitchenette onto the tomb of Sir Thomas Gresham.

Z/Yen was founded in 1994. The first place we called home was Garrard House, 31-45 Gresham Street, EC2V 7DN. The modern street layout of Gresham Street came into existence in 1845 with the widening of Cateaton Street, Maiden Lane, St Anne’s Lane and Lad Lane. This collection of narrow lanes was renamed Gresham Street after Sir Thomas Gresham, and their previous incarnations as separate entities accounts for the unusual orientation of the street.

[London : 1860]. Print of the old Gresham College on Gresham Street, built by George Smith in 1842-1843. Engraved by James Tingle (1801-1858) from an original study by Thomas Hosmer Shepherd. Originally produced for Thomas Dugdale's part-work survey published as "The Curiosities of Great Britain" or "England Delineated" in various formats between 1838 and 1860. 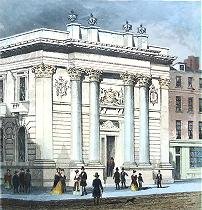 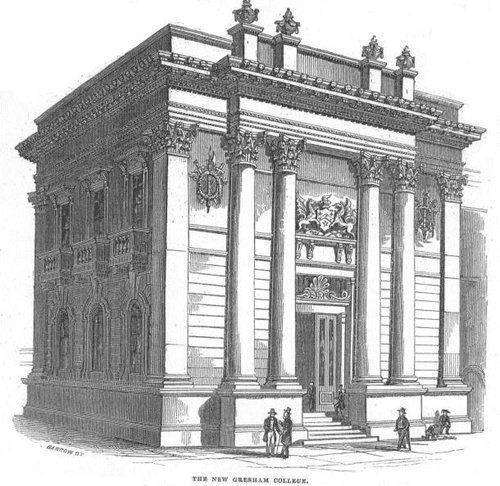