FS Club 7—A Musical Ten Out Of Ten

September 21 saw the City of London (and many Zoom backgrounds) painted red for the City Giving Day Quiz.

With a nod to our name, we performed best in the music round, scoring a perfect 10 out of 10 with our knowledge of musicals, as evidenced below. 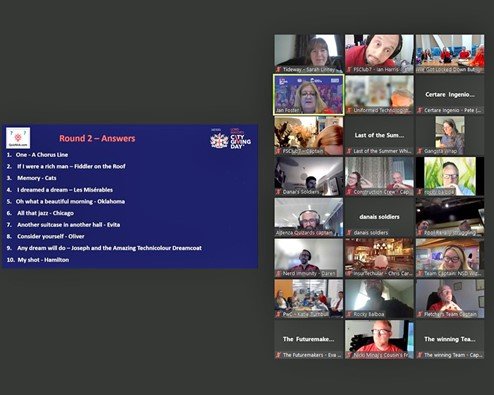 Unfortunately, Z/Yen did not Reach the stars or Number One, but a great time was had by all, and there surely Ain’t No Party like an FS Club Party!

Like much Z/Yen activity, in the end it was all down to the numbers. FS Club 7 was just three points shy of a tie-break place. Still, the Z/Yen team gave it 117% and left 93% of it on the virtual field of play. The team hopes to participate and take the crown in 2022, which would be a Dream Come True for Z/Yen.