City Streets Are Made For Walking - The Walk Of Commerce & Finance 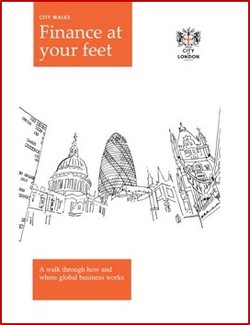 Z/Yen tries to help people understand commerce and finance, arranging open days and walking tours for students of all ages. In 1997 we first led some overseas visitors on an extended tour of work in the City of London. We were surprised at the paucity of sites for visitors who wanted to understand the contemporary business of the City. It was easy to find out about the Romans, Christopher Wren, or Charles Dickens, but not what the 500,000 people in the Square Mile worked at each day. We were also surprised at the number of corporate visitor centres that had quietly stolen away, Lloyd’s, London Stock Exchange, or LIFFE for example. Yet City businesses complain that today’s children don’t understand what they do, or that adults outside the central business district feel excluded.

In February 2014, “City Walks: Finance At Your Feet” was published on iBooks (free). To enjoy, take your browser here to download the pdf or your iPad iBook directly from iTunes (free). You can also download via iBooks or iTunes by searching for “City Walks City of london”. If anything, Z/Yen is now energised to do more software development in this space and have been conducting some ‘Wikiwander’ research on a new flexible, playlist approach to walks and tours for cities and regions – get in touch if it interests.