Background
This idea originated in 2004 in response to a desire to contrast views on climate change.

E3G (www.e3g.org) and others, including Z/Yen Limited (www.zyen.com), are asking, “why can’t we have renewable hydrogen power in X years?” It’s a great question in that, subject to choosing X, all negative answers spell disaster. Without moving almost wholly to renewable hydrogen power, significant climate change is unavoidable. While this view is increasingly accepted among scientists and engineers, again with a great debate about what value they might give X, it is not a view that influences the public and thus in turn politicians, senior business people or senior government officials. To set out one target, moving to 50% hydrogen power in 10 years, leads to an ambitious web of projects that might be needed to get there quickly: 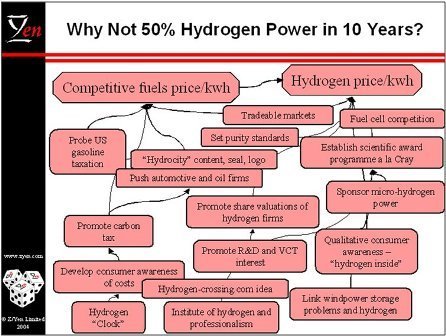 However, there is little consensus about timeframes, so first we need to bring the immediacy of the climate change problem to the attention of a much wider audience. With consensus about the immediacy, we can move to galvanising people around solutions. Solutions will be manifold – 6 billion people will need to make slightly different decisions every day about power supplies, purchases, transportation, insulation, planning changes from petrol/gas stations to hydrogen stations, the social status of being an early user of a hydrogen car, the re-design of national grids, taxing non-renewable fuels or how much effort to put into less permanent solutions. The first step is to make people aware of the inevitability of the problem.

Our proposal is to bring the immediacy and inevitability to the attention of the public through a “clock”. To personalise it, and to give credit to the initiator of the idea, it might be called “Tom’s Clock” – Tom Burke, currently Rio Tinto’s environmental advisor and a former director of Friends of the Earth. Naturally, in today’s age, The Climate Clock will definitely have a virtual form, i.e. a ubiquitous computer application suitable as a screensaver, but might also take physical forms. For instance, a Mauna Loa physical clock might feed raw CO2 numbers, or a Maldives physical clock might set sea level. It might look like a modified Sun Clock: 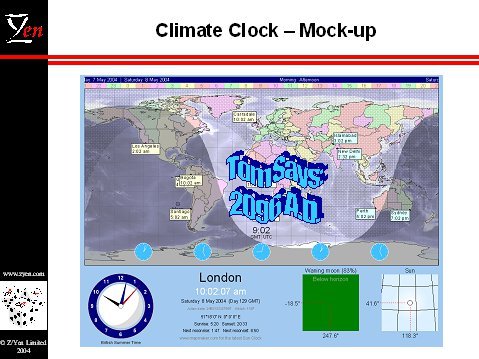 Key features are that the Climate Clock:

However, it is much more than a clock, it should also start a movement by inspiring others to create their own Climate Clocks and for wider groups to be interested in the popularity of different types of Climate Clocks. Who might make their own clock?

The website for the clock might run as an online “game” or scoreboard showing the popularity of various clocks, the numbers of downloads or the numbers of accesses, with discussion groups objecting to particular elements of certain clocks, e.g. claims made about emission reductions, or debating the wide divergences among certain clocks.

How Does It Tick? – The Mechanics

The Climate Clock would sit on top of a simple system dynamics software tool. Interested users, albeit a minority – but a crucial one, could access the system dynamics tool directly and alter variables to see what might turn back the clock. With the ‘back’ of the Climate Clock ‘off’, a section of the ‘clockwork mechanism’ might look like the following:

Interested users can change key variables and see the consequences. If they feel strongly enough about alternative ideas, they can change the base model to suit their thoughts, upload their model and publish it on the website, e.g. “Shell’s Clock with New Hydrofuel”. In addition, the clock could easily take ‘speaking clock’ form using automated voice response technology.

In short the Climate Clock should: