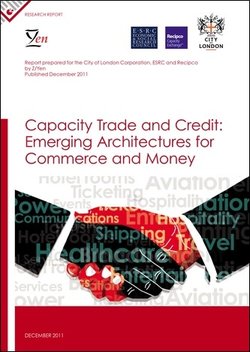 Z/Yen's 2011 "Capacity, Trade and Credit: Emerging Architectures for Commerce and Money” report, commissioned by the City of London Corporation, Recipco and the Economic and Social Research Council, was referred to as a “milestone” in research in the sector of multilateral reciprocal trade. It highlights the potential for capacity exchanges to generate alternative credit systems for businesses, improve productivity, and stimulate innovation in finance and business.

The report explored existing and potential applications of multilateral reciprocal trade, including countertrade and corporate and retail barter. Reciprocal trade constitutes an estimated 20% (over US$100 billion) of global trade but contracts and negotiations tend to be lengthy and complex. The emerging multilateral reciprocal trade sector offers the potential to eliminate the inefficiencies of bilateral capacity exchange through the mechanism of common tender – an alternative means of exchange to sovereign currency which is not convertible to cash, earns no interest and can only be redeemed for goods and services within the capacity exchange.

The research concluded that multilateral reciprocal trade using common tender is an emerging sector with the potential to create complementary credit systems alongside traditional financial credit. These systems should increase trade and contribute to sustainable economic growth based on productive capacity rather than relying on banks to provide credit, and could generate wider social benefits. The report also finds that a clearer, more solid regulatory framework might encourage more rapid development of the multilateral reciprocal trade sector.

The full report was 200 pages and had numerous recommendations about using new currencies and exchanges to increase economic growth. Lord Sassoon participated in the launch and a number of other senior officials explored the implications of the report. For the City of London, this has been their most commented-upon report since the Global Financial Centre Indices – www.globalfinancialcentres.net - begun in 2007. The most important thought was trying to introduce a UK WIR. To the Swiss, it’s a clear success comprising a quarter of Swiss firms and about £3.2 billion of trading (an average trade is half CHF and half CHW).

In creating the WIR, what the Swiss did in 1934 was to push their regulator to regulate two currencies rather than one. They removed the “monopoly” on money that most nations believe fiat currency requires. From there the system does its thing or not. The national currency retains its supremacy based on the universality of tax and its monopoly on the use of force, but also in competition for credit. There are a few more modern, though problematic, examples in the report, and the WIR history is not without its twists and turns (the Swiss feel no need to promote the system – they don’t seek non-Swiss members or international expansion – http://www.wir.ch/de/wir-kunden/ ).

"Given the concept of multilateral reciprocal trade, one possible approach to the establishment of a capacity exchange industry would involve UK trade, regulation and tax authorities developing a comprehensive approach to multilateral reciprocal trade. This would include developing an environment in which such trade could be carried out with sufficient guidelines and oversight to make it a competitive and attractive market."...

"Should the UK see sizeable prospects for economic growth and job creation through multilateral reciprocal trade, it could support regulation of either common tender or capacity exchanges. At a time of growing interest in monetary policies, sovereign currency stability and emerging propositions for alternatives to sovereign currencies (e.g. LETS, digital currencies and other common tenders used in trade), the second policy recommendation - “regulation of common tender” - in particular its issuance and liquidity management, could help to prevent fraud and inform the monitoring of common tender supply and backing mechanisms."

The report stimulated other work, for example the City of London commissioning BSI to conduct workshops on capacity trading standardisation that aided the foundation of the industry trade body.