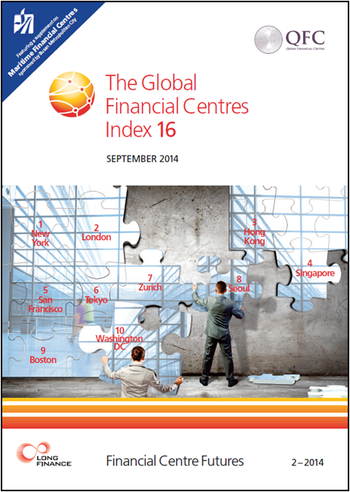 GFCI 16 was published in September 2014 as part of the Financial Centre Futures publications (press release).

GFCI 16 provides profiles, rating and rankings for 83 financial centres, drawing on two separate sources of data - instrumental factors (external indices) and responses to an online survey. 105 factors have been used in GFCI 16, of which 42 have been updated since GFCI 15 and 4 are new. New York, London, Hong Kong and Singapore remain the top four centres. All four centres lose points in the GFCI ratings but retain their relative ranks. New York remains the top centre but by only one point on a scale of 1,000. Following GFCI 15, London remains just behind New York due to uncertainty over the UK’s position in Europe, regulatory creep and the UK appearing to be less welcoming to foreigners all being contributing factors.