Z/Yen's continuing quest to promote societal advance through better decisions about technology and finance has led to a major advance in world peace. PeaceLand is our new 'Metaprose' App that so consumes dictators' attention they have no time for real conflicts such as war or special military operations. We were inspired by Herbert Simon's (1916-2001) insights to distract the dictators, “What information consumes is rather obvious: it consumes the attention of its recipients. Hence a wealth of information creates a poverty of attention, and a need to allocate that attention efficiently among the overabundance of information sources that might consume it.” By combining our work on the Metaverse, on smart ledgers, geocoding, indices, and even on NFTs, we have created a Metaprose Land so addictive that dictators who fall into it are completely consumed. We are delighted to have launched PeaceLand to a small range of dictators with such fantastic results that peace reigns throughout. While we are unwilling to open such an extensive world to untrained players, you can have a taste of the global competition in the world market of Z/Yen's world prediction market, ExtZy.

Yet again Z/Yen turns its attention to the issues of our time, last year saving the global economy, this year world peace. In all honesty, following the written tradition of Z/Yen’s ancient manuscripts, The Z/Yen Papers, attributed to our legendary founder Chao Kli Ning (499BCE – 401BCE), we were actually ‘seeking an opportunity to make a quick buck’ out of the Metaverse, but the commercial prospects seemed extremely poor.

As Don Marquis (1878-1937) remarked, “Publishing a volume of Metaverse is like dropping a rose petal down the Grand Canyon and waiting for the echo.” Taking Albert Einstein (1879-1955) seriously, “Only two things are certain: the Metaverse and human stupidity; and I’m not certain about the Metaverse”, we realised he was right. There is no Metaverse of substance. We needed to invest in The Metaprose. [Ed, Shurely you meant "The MetaproZe" at Z/Yen?]

Digging deeper into the wisdom of the ancients, we discovered a vital clue in a play by Molière (Jean-Baptiste Poquelin, 1622-1672), Le Bourgeois Gentilhomme (1670), « Tout ce qui n'est point Metaprose, est Metavers; et tout ce qui n'est point Metavers, est Metapros. » “All that is not Metaprose is Metaverse; and all that is not Metaverse is Metaprose.” Thus enlightened, it was clear that humanity, and even Mark Zuckerberg, have been looking in the wrong place. The Metaprose is humanity’s salvation.

We have long cherished a friendly companionship with Neal Stephenson (1959-), who coined the term “Metaverse” in his 1992 speculative fiction novel, Snow Crash, a prophetic novel presumably about an abortive invasion of a central Asian country in winter. Reading Neal’s runes we had the germ of an idea. How could we use the poetry of the ancients to deliver peace in our time?

Using several script programming languages, Perl and PHP for starters, and the deep structural language of the universe itself, EMACS Lisp, we quickly ploughed the entire canon of humanity’s poetry into verse, turning it over to the pro’s. Core to this endeavour was obviously John Milton (1608-1674). Inspired by “Peace hath her victories, no less renowned than War” we decided to create PeaceLand, a Metaprose reality where dictators can act out their aggressions yet each succeeding victory creates more peace. The more they fight, the more peaceful PeaceLand becomes. Well, in bits & pieces. 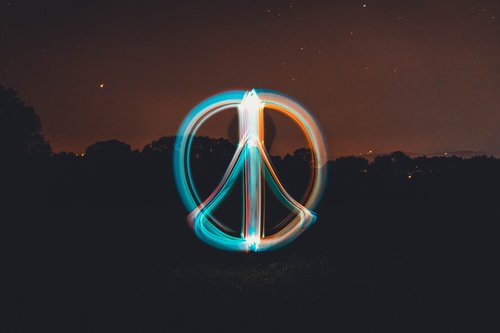 Of course, Milton was bound by the technology and hallucinogens of his time, “... then there was war in heaven. But it was not angels. It was that small golden zeppelin, like a long oval world, high up. It seemed as if the cosmic order were gone, as if there had come a new order, a new heavens above us: and as if the world in anger were trying to revoke it”, else he would have preceded us. But our virtual reality goggles did successfully render the golden zeppelin in 3D.

Being such an attractive piece of real estate, PeaceLand was swiftly occupied by poetic dictators around the world. In turn they attracted the dictators of prose. Everyone sought fame as quickly as possible, for as Marcus Valerius Martialis (Martial, 38-104) valued fame, "If fame is to come only after death, I am in no hurry for it." Using our ChainZy smart ledger system we added an entire Non Fungible Token (NFT) apportionment scheme. Dictators now spend tonnes of time proving to each other their rights to particular pieces of 'truly abstracted' art, along with 'in-game' Metaprose treasures, tokens, gold, incantations, talismans, and skills. Of course our GeoGnomo geocoding system easily provided NFTs for PeaceLand plots of virtual land. Again, resident dictators began assiduously collecting these like baseball cards. We were thrilled as dictators demonstrated Max Frisch’s observation, “Technology is a way of organizing the Metaverse so that man doesn’t have to experience it”, by revelling in sending millions of automated minions to anonymous oblivion. Everyone was happy. As programmers, we felt proud.

Z/Yen added a Metaprose Peace Centres Index to our existing Financial Centres and Smart Centres indices that led to even more 'competition to calm' things down as dictators raced to be number one on the charts. Rich Cook (1944-2022) complimented us, “Programming today is a race between software engineers striving to build bigger and better idiot-proof programs, and the Metaverse trying to produce bigger and better idiots. So far, the Metaverse is winning.”

Things got even better when the dictators we had lured from so-called Reality created a Metaprose Heaven and Metaprose Hell. They began sending one another to Heaven & Hell in sequence. Then they created a PeaceLand MetaPurgatory. Dictators, even those quite keen on the computer game Civilization VI, were drawn so deeply in to the point that they forgot make War in Reality itself. They were dead to the world. As Homer (c.800 BCE–c.701 BCE) counselled, “I make not war with the dead.”

Beowulf (c700) gave a rave review, “Sometimes he [the Metaprose] allows the mind of a man of distinguished birth to follow its bent, grants him fulfilment and felicity on earth and forts to command in his own country.” Lord Byron (1788-1824), despite his poetic leanings, also approved, “That Metaprose is a Metaverse, and Metaverse is a Metaprose; convincing all, by demonstrating plain – poetic souls delight in Metaprose insane.”

Still, accusations of insanity were made about us by a number of our less literary friends from the hard sciences. We invoked the quantum physicist Douglas Adams (1952-2001) (by virtue of the quantum of his book sales) in our defence, “There is a theory which states that if ever anyone discovers exactly what the Metaverse is for and why it is here, it will instantly disappear and be replaced by something even more bizarre and inexplicable. There is another theory which states that this has already happened.” We agree.

Z/Yen has replaced the Metaverse with PeaceLand’s Metaprose, and in Milton’s own words, “No war or battle sound, Was heard the world around.” As Mainelli opines, "Reality is a place for those who can't handle peace." Oh, and good will to all humankind, especially those who send us cash via PeacePay.