Early in the InterChainZ project it became apparent that the further discussion moved away from Bitcoins and blockchains, the easier conversations became. Bitcoins and blockchains were burdened with too much baggage. Terminology is evolving rapidly, hence the team’s focus on “mutual distributed ledgers” as the term of choice. Further, the team emphasised the ‘boring’ nature of MDLs, and that “boring is brilliant”. The technical focus might be on boring ‘ledgers’, but the excitement is in the applications above.

It also became clear that ‘identity’ issues are universal. One of the great advantages of doing consortium research was that the identity chains were both ‘use cases’ and essential infrastructure that would have had to be built for anything else of substance. Distinguishing ‘identity’ from ‘transactions’ and ‘content’ made processing and distribution sense, at the expense of a bit more complexity in comprehension. While InterChainZ showed that MDLs can work together, and the project explored many different architecture possibilities, what was explored is certainly only a small portion of what is possible. One business area that could use more exploration is whether an MDL system is best as one MDL per entity (person, corporate) interacting with many transaction or content MDLs, or a set of big MDLs (identity, transaction, content) for a process such as anti-money-laundering, leading to identity information replication on different processes.

Different business uses probably require different node structures. For example, the Master node architecture would be appropriate where a regulator is confirming all transactions in a market as being from valid market participants. The Supervisor node architecture might suit a small group of large organisations interacting with multiple smaller ones. While Bitcoin blockchain’s ‘proof-of-work’ validation approach is fascinating, one of the basic premises for InterChainZ was to focus on exploring “non-blockchain consensus or identity” MDLs, i.e. what benefits could be achieved when not using currencies or tokens. This decision provoked some external criticism, principally questioning whether there were benefits to MDLs without proof-of-work validation mechanisms.

Richard Gendal Brown has produced a categorisation that starts to make sense of “truthful records” versus “how things are agreed”. His diagram shows that there are a number of useful areas where different structures might apply:

Nick Williamson and others have introduced a terminology distinguishing ‘permissionless’ ledgers that rely on tokens or incredulous amounts of trust, against ‘permissioned’ ledgers where there are strong structures for multiple parties, e.g. regulators, or the ledger is within a single organisation:

Further, token or coins are expensive. The process of solving the equations needed to maintain a token-based system consumes energy and slows transactions.  The approximately 10 minute transaction window of Bitcoin and the 7 to 15 second window of Ethereum contrast strongly with the 3,000 to 5,000 transactions per second achieved using InterChainZ’s ‘permissioned’ ledgers, i.e. 106 times faster than Bitcoin. 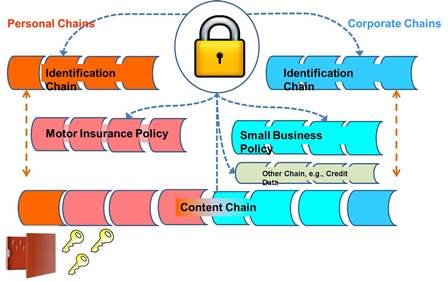 In testing, the content chains held a variety of documents, pictures, videos, or spreadsheets, from a few thousand bytes up to 100 megabytes. In practice, the numbers are likely to grow rapidly.  Just for the personal identity chain a basic 100 nodes handling 1,000 clients would have a chain (excluding updates and changes) of approximately 75 gigabytes. Moving to a more realistic 500 nodes and 10,000 people gets to 3.75 terabytes, or 500 nodes and 10,000,000 people to 3.75 petabytes. Thus, the ability to segregate the large storage requirement, yet retaining the same MDL architecture, provides an ability to control this increasing size more smoothly. Further, most MDL benefits remain for a content chain under a managed service. Users can still copy it if they wish to. The function of adding new transactions to the content chain can still be transferred easily, preventing permanent centralised control of the content chain by a supplier. 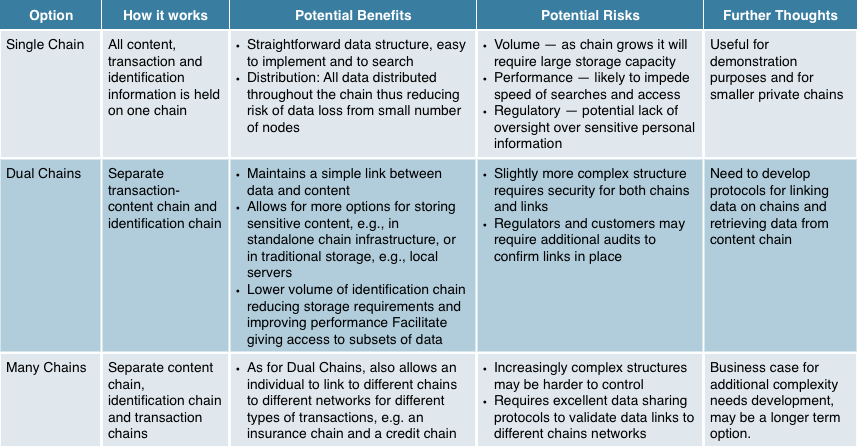 At a basic level, the project showed that MDLs work and can work together, but a number of avenues are yet to be explored, and a lot of essential infrastructure is lacking.  Further research could include:

To find out more about our research, please visit the IntereXchainZ web page.