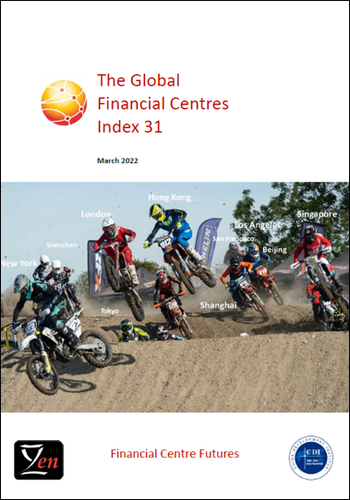 The thirty-first edition of the Global Financial Centres Index (GFCI 31) was published on 24 March 2022. GFCI 31 provides evaluations of future competitiveness and rankings for 119 financial centres around the world. The GFCI serves as a valuable reference for policy and investment decision-makers.

126 financial centres were researched for GFCI 31 of which 119 are now in the main index. The GFCI is compiled using 150 instrumental factors. These quantitative measures are provided by third parties including the World Bank, the Economist Intelligence Unit, the OECD and the United Nations.

The instrumental factors are combined with financial centre assessments provided by respondents to the GFCI online questionnaire. GFCI 31 uses 74,982 assessments from 11,934 respondents.

Asia/Pacific centres generally recovered losses that they experienced in GFCI 30. This suggests that there is restored confidence in the economic strength of the region, and in trade performance. North American and Western European centres had generally stable performance.

The data on which GFCI 31 is based relate to the period up to the end of 2021. While we might have expected more volatility in the ratings as the world continues to recover from the Covid-19 pandemic, the broadly level ratings in the index suggest that in the last half of 2021, confidence was returning to the world economy.

However, the invasion of Ukraine by the Russian Federation will affect future ratings in ways that we cannot predict, except that it seems clear that the performance of the Russian financial centres in Moscow and St Petersburg is likely to fall sharply following the imposition of broad international sanctions against the Russian economy.