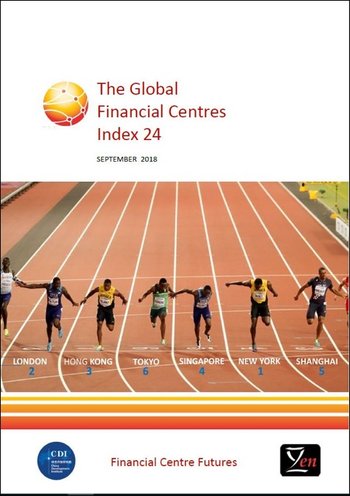 The Future Of Financial Centres

September 2018 sees publication of the twenty-fourth edition of the Global Financial Centres Index (GFCI 24). GFCI 24 provides evaluations of future competitiveness and rankings for 100 major financial centres around the world. The GFCI serves as a valuable reference for policy and investment decision-makers.

110 financial centres were researched for GFCI 24 of which 100 are now in the main index. The GFCI is compiled using 137 instrumental factors. These quantitative measures are provided by third parties including the World Bank, the Economist Intelligence Unit, the OECD and the United Nations.

The instrumental factors are combined with financial centre assessments provided by respondents to the GFCI online questionnaire (www.globalfinancialcentres.net). GFCI 24 uses 31,326 assessments from 2,453 respondents.

The Headlines Of GFCI 24 Include:

Not for the first time, New York took first place in the index, just two points head of London, although both centres fell slightly in the ratings. Hong Kong is now only three points (on a scale of 1,000) behind London. Shanghai overtook Tokyo to move into fifth place, gaining 25 points in the ratings. Beijing, Zurich, and Frankfurt moved into the top ten centres, replacing Toronto, Boston, and San Francisco.

In Western Europe, Zurich, Frankfurt, Amsterdam, Vienna, and Milan moved up the rankings significantly. These centres may be the main beneficiaries of the uncertainty caused by Brexit. Surprisingly, despite some evident success in attracting new business, Dublin, Munich, Hamburg, Copenhagen, and Stockholm fell in the rankings, reflecting respondents’ views of their future prospects.

In Asia/Pacific, the leading centres performed well, closing the gap on London and New York at the top of the rankings. There were steady increases for Shanghai, Sydney, Beijing, and Guangzhou and GIFT City (Gujarat) and Hangzhou entered the index for the first time.

The leading North American centres fell back in the rankings and ratings overall, although Los Angeles and Washington DC gained places.

In Eastern Europe and Central Asia, there were significant gains for Astana, Budapest, St Petersburg, and Tallinn. Astana only officially launched their financial centre in July, and it is unusual for such a new centre to perform so strongly.

In the Middle East and Africa, Dubai, Abu Dhabi, and Doha all rose significantly reversing the trend from GFCI 23. Cape Town is the highest new entrant to the index, ranking 38th in its first entry.

In Latin America and the Caribbean there were mixed results. Bermuda, Sao Paulo, Mexico City, and Rio de Janeiro performed strongly, while other centres fell in the rankings.

Island centres fell in the index, with the exception of Bermuda, which rose six places. The British Crown dependencies of Jersey, Guernsey, and the Isle of Man all fell significantly in the rankings, with the Isle of Man dropping 27 places.