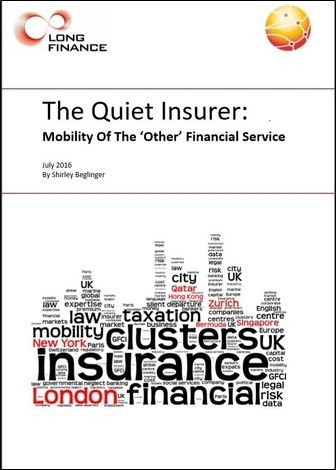 The Quiet Insurer: Mobility Of The 'Other' Financial Service

Insurance is one of the longer-term financial sectors. As our author, Shirley Beglinger, points out, insurance thinks long-term about finance but also about location.

Insurers have clustered around London since the 16th century. Continental financiers were attracted to Sir Thomas Gresham’s homage to their bourses when he opened the Royal Exchange (Byrsa Londinensis) in London in 1571, as wars on the Continent forced them to decamp from the bourses of Antwerp and Bruges.

Despite the surprising nimbleness and jitteriness of some insurers, Shirley has a positive view of insurance clustering and London’s global role. She puts her finger accurately on the weaknesses of North American markets, Chinese markets, Middle Eastern markets and others. One might point to London’s decades of downward-drifting market share or the ‘Spanish practices’ of a market that seems to feel revulsion towards much technology, but Shirley argues it’s only London’s market to lose. To paraphrase Johnson, “when an insurer is tired of London, he is tired of [life] insurance.”

Londoners will hope that future decisions over regulation and tax only strengthen their insurance cluster. Other financial centres will always examine an opportunity to poach business, and Shirley highlights perhaps Singapore as the leading long-term contender. London is heading toward a half-a-millennia run of success. Shirley wills London a good ten centuries. That’s what Long Finance is about.