Figures varying from President Bush to Sir Nicholas Stern have called for investment in low carbon technologies to rescue us from the consequences of climate change. The scale of the investment required is not always appreciated. The US Energy Information Administration (US EIA) estimates world installed electricity capacity as being 4000 GW (gigawatts) at 2006 (last available statistics) of which renewables comprise just over 22%. US EIA expect world electricity consumption to double by 2030, which implies an annual increase of 160 GW a year. At this rate, the world needs to install about 36 GW of renewables every year just to keep the current ratio of renewables to non-renewables. In their ‘beyond alternative’ or ‘blue scenario’ the International Energy Agency begin to map out the investment needed for renewables to really transform the outlook for energy and climate in the mid 21st century. The IEA estimates that to achieve this transformation requires hundreds if not thousands of gigawatts from low carbon sources. This represents an annual installation of some 50 carbon capture thermal plants, 30 nuclear plants, 17,000 on and off-shore wind turbines, 100 biomass plants, 130 geothermal schemes, 80 solar concentration plants, 16 GW of hydro schemes, and 200 million square metres of solar cells: a simple estimate of the cost of this quickly reaches some €500 billion a year. And in a way that’s good news – investment on such a scale could go quite a way towards reviving the world’s economy.

Governments claim they are committed, but history raises doubts. Lack of confidence in to generate for carbon. For example, the EU ETS market Phase 1 (2005 to 2007) carbon price crashed in 2007 when it became apparent that EU governments had jointly issued far too many permits to emit, i.e. clearly they weren’t committed to reductions. Despite numerous conferences, papers and communiqués, there is not yet enough confidence that governments will meet carbon emission reduction targets to generate enough investment. Further, the worsening economic environment leads governments to talk about ‘temporary’ easing of carbon reduction commitments at the same time as easing demand lowers carbon prices.

One traditional hedging mechanism is to issue index-linked bonds. Index-linked bonds are not uncommon; index-linked government bonds (US Treasury Securities, UK Treasury bonds – ‘gilts’) are not uncommon. Indices such as inflation and commodity prices have been used by governments and by corporations to set the amount of interest on debt. An attractive option would be for project developers to issue bonds indexed to the three key risks – government performance against targets, fossil fuel prices against a break-even level, and carbon prices against a break-even level? There are many variations, e.g. the price of oil in country (governments can raise taxes to sustain this) or a feed-in tariff rate index. Such an index-linked bond would reduce the cost of capital for a developer exactly in those situations where the profitability of clean energy is threatened by government action, or inaction.

Bonds indexed to emissions, fossil fuel prices or carbon prices would transfer the risk from the developer to the investor. But we know that investors are not keen to bear those risks, either, from their reluctance to fund many clean energy projects. Investors cannot easily hedge those risks, but that is exactly where government can help – by issuing debt with the opposite risk profile. Index-linked government carbon bonds would provide greater returns if government falls short of achieving its targets, if fossil fuel prices remain low, or if carbon prices remain low. That kind of index-linked gilt could easily be issued, and it would provide a natural hedge against our project developers’ government risk. An investor would invest in a low carbon project (either equity or debt), and simultaneously buy a proportion of index-linked government carbon bonds.

As a simple example, take an investor looking at investing in a 2010 wind farm that is competitive at €95/megawatt-hour. Say that the price of fossil fuel derived power is €70/megawatt-hour in 2010, with a government target of €105/megawatt hour in 2015. The index-linked gilt to provide a hedge would pay a margin, with the margin a function of the fossil-fuel derived power price. For example, for every €5 below €105, the interest rate could go up by 1%. For every €5 that the fossil-fuel derived power price is above €75, the interest would reduce by 1% with a minimum of zero. A creative borrower might offer leveraged products where the interest rates changed at different rates above or below the target. The benefit to the investor in such bonds (gilts) would be able to offset the price risk of his or her investment in the wind farm.

An example of a more complex investment where a carbon index instrument could help considerably, one might take a tidal barrage scheme. Such schemes have characteristically huge capital costs, low costs of operation once installed, and long lifetimes (around 200 years). This means they are difficult to value using conventional discounted cash flow methods. In Index A we show some calculations for a 4 km barrage costing €1.5bn (and some will be 10-20 times larger) producing 2.75 terawatt hours of electricity per year. This scheme needs carbon prices of €40/tonne CO2e to give a payback period around 80 years and a price of €60/tonne for a payback of 30 years. (Carbon prices raise the wholesale costs of electricity produced by conventional means, thus increasing the price that we could charge from the barrage scheme). We show the effect of the investor buying a bond paying 4% index to a carbon price of €60/tonne. The bond is leveraged – above €60, the interest rate falls by 1% for every €20 increase in carbon. Below €60 the interest rate increases by 1% for every €5 decrease in the carbon price, and below €40 the rate increases by 1% for every €2.5 decrease. Here is a graphic of the interest rate structure: 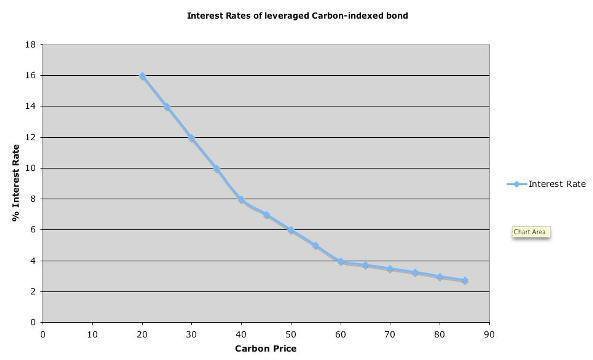 The impact of such an instrument is to significantly reduce the investors’ carbon price risk. Interestingly, the investor does not have to hedge the entire capital sum of €1.5billion. Buying bonds of 10% of the project capital (€150m) is sufficient in this case to hedge against a fall in the carbon price to €30/tonne. 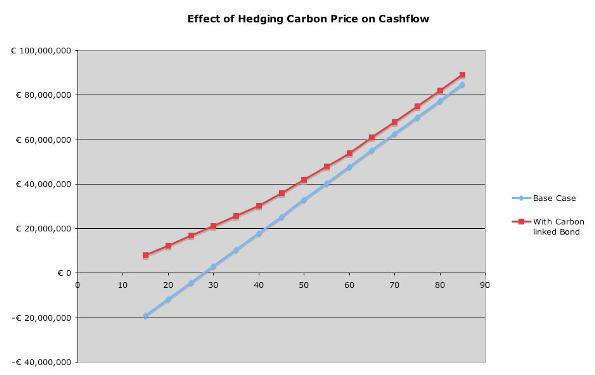 Without the bond the payback period for the project is 450 years (longer than its expected lifetime) while with the bond, its payback is 70 years. More details are shown in a table in an Appendix to this document. 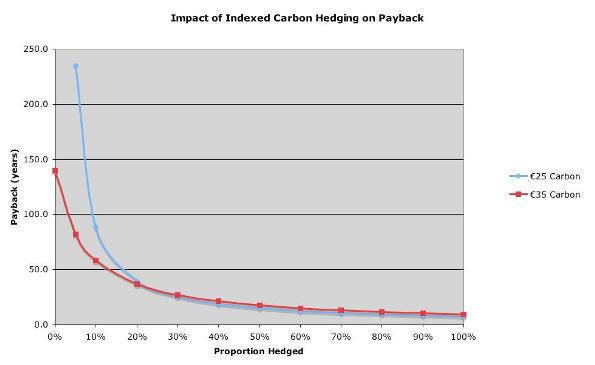 An alternative hedging approach would be for the project investor to enter into a “carbon swap.” The terms of such a swap would have the investor pay a fixed rate of interest on the notional amount of the swap, and receive a payment based on the difference between the spot carbon price on a payment date and an agreed upon floor. The swap market makers would still require the government to issue the index-linked gilts (the net effect off the swap would be to create synthetic fixed rate gilt) until such time when a forward market in carbon developed, similar to the LIBOR futures market.

The advantages of a swap scheme for investors would include, no additional capital outlays for a hedge if the swap were struck "at the market", with a product whose existing regulatory framework mitigates counterparty risk (notwithstanding today’s headlines). Large participants in mortgages markets already use swaps in a similar way to hedge prepayment risk on fixed rate mortgages by entering into fixed/floating interest rate swaps. The long effective duration of the swap provides an efficient tool to manage the negative convexity inherent in fixed rate prepayable mortgages.

Other structures are possible, too, linking the principal repayment itself to emissions, fossil fuel prices or carbon prices, or perhaps feed-in tariffs. Maturity dates, structures and tranches can all be varied. One objection to index-linked carbon gilts is that governments do not control emissions as they do inflation. True, but governments may have as much control. Emissions are at least as much under government control as inflation, which is subject to import/export ratios, money supply, credit, productivity, weather and all the vagaries of an economy. Secondly, in multi-government emissions, such as the European ETS, a quick comparison with the European Central Bank on inflation shows that governments have a similar amount of joint control on emissions.

One quick observation is that if people are investing in gilts as well as green or clean tech investments, the investment pool for green tech has shrunk. Strictly, this may be true, but half of something is better than all of nothing. In fact, if people truly believe governments will meet their emission goals, then the index-linked bonds will fall in value and investors will not need to use them in green tech investment, thus all desired investment would be directed at green tech. Moreover, investors, such as insurers and pension funds, are investing on a portfolio basis. Their ability to hedge government risk of non-performance in their portfolio is likely to increase their low carbon holdings markedly.

Governments claim they are serious about meeting carbon emission targets, serious about moving to a low carbon economy. Governments are likely to issue a large number of gilts over the next few years due to the credit crunch. By issuing carbon bonds linked to independent, auditable index metrics such as emission targets, the price of fossil fuel and the future carbon price, governments would remove private investors’ objections that their biggest uncertainty is government commitment. Likewise, given that failure to perform will cost, government would have a real incentive to meet its emission targets. Finally, government debt itself is likely to become a highly competitive market, and index-linked carbon gilts might well be a way of differentiating government debt to make it more attractive.

We extend our thanks to Sean Kidney, Tony Manwaring, Raj Thamotheram, Nicolas Véron, members of the London Accord and members of the Network for Sustainable Financial Markets for helping to provoke these thoughts.

Z/Yen created and supports the $15M London Accord, the world’s leading ‘open source’ research cooperative into climate change economics. As well as research and contributing papers, client work includes a long-term project (over 15 years) using options theory in relating the implications on tariff barriers to the costs of capital in a heavy chemicals industry, and building an economic model which allows businesses and regulators to predict the cost of carbon emissions permits under the EU/ETS trading scheme.

As an example, hedging a large renewables project with a capital cost of €1.5bn that produces 2.75 terawatt hours of electricity per year is set out below. The plant produces electricity at a cost of €105/MWh, and the wholesale price of electricity without carbon pricing is assumed to be €90/MWh. The table shows payback periods with and without ‘hedging’ (buying a leveraged 4% bond linked to the price of carbon emissions permits (probably those traded on the EU/ETS). In this case the amount hedged is 10% of the total capital cost or €150m.

According to the IEA, a large number of projects need to be undertaken to shift from fossil fuels to transform the outlook for energy and climate in the mid-21st century. Using some Z/Yen estimates of plant costs we arrive at a figure of approximately €500billion per year. This happens to be in line with approximately 1% of global GDP (cf Stern Review) and also in line with the London Accord bottom up estimates, Michael Mainelli and James Palmer, "A Portfolio Approach To Climate Change Investment And Policy", The London Accord: Making Investment Work For The Climate, City of London Corporation (2007).