Ian Harris and Mary O’Callaghan continue their discussion on the use of predictive analytics in civil society organisations, this time illustrating their ideas with an exciting case study on retaining and regaining members and/or regular givers.

The Story So Far

In the last issue of Charity Finance, we presented a case study, “Rubies in the Dust”, showing how we used statistical learning models to boost direct donor fundraising in a charity with £12M per annum in voluntary income and a large list of donors.

We outlined several techniques we tend to use in civil society organisations to predict and classify information, to solve problems such as cost/benefit optimisation of charitable activity, rebalancing a charity’s investment portfolio, or setting reserve level ranges. We have been deploying these techniques in civil society organisations as diverse as The Marine Stewardship Council, Action for Blind People, City Parochial Foundation, The New Opportunities Fund (now The Big Lottery), Royal National Institute of Blind People, plus trades unions, professional bodies and religious organisations. We showed that statistical learning models, known as support vector machines (SVMs), are especially good at predicting and classifying individual items of information. We concluded that the predictive ability of SVMs is significantly better than conventional “rule of thumb” techniques for predicting whether a prospective donor is likely to give or not.

We suspected that applying SVM techniques on higher-value items, for example identifying donors might graduate to regular giving or legacy pledges, could be very valuable indeed.

As luck would have it, we soon got an opportunity to test a regular income example with another civil society organisation; one whose income base stems largely from membership income; tens of millions in income each year through hundreds of thousands of members. The benefits of good follow-up processes for leavers include improving data quality and understanding membership trends, but there is also a key financial benefit; if you get this process right it pays for itself many times over through income recovery, by persuading a proportion of the leavers to rejoin.

The key point is to follow up swiftly and efficiently; simple analysis and evidence from other membership organisations proves that you are far more likely to persuade a leaver to rejoin if you follow-up with them swiftly; if you allow two to three months to pass the chance of success roughly halves. And the financial benefits of re-joiners are substantial; for this large organisation hundreds of thousands of pounds in membership income from rejoiners per annum. When this is compounded by the number of years the average rejoiner stays, the extra income soon runs to millions of pounds each year.

Not only is a leaver far more likely to rejoin if pursued promptly, it also makes sense to pursue leavers with rigour. Those leavers who do not respond to the basic, correspondence approach, but are subsequently contacted with an enhanced approach, e.g. with a telephone call, are as likely to rejoin as those who respond to the basic approach. However, there is a significant cost to an enhanced approach; it is not viable to attempt to make telephone contact with all leavers who fail to respond to correspondence.

We thought this problem would lend itself to statistical learning predictive analytics; which indeed it did. We trained our SVM, PropheZy, using members who had lapsed during 2009, including many who had subsequently rejoined through the basic follow-up process. Key data included gender, date of birth, duration of membership and various membership grouping and categories, specific to the organisation, which indicated particular interests and degree of involvement in those interests. The data proved highly predictive and we were able to construct three bands showing high, medium and low propensity to rejoin, as indicated in Table One below.

Table One: Total members by propensity of re-joining

* this analysis was based on responses to lapsing letters only

PropheZy, is not the only tool available if you want to apply statistical learning through an SVM. Statistical packages such as SPSS, Minitab, SAS, R and Matlab all offer SVM capability. Indeed, in simple cases with very few variables, even using Excel’s regression functions can be predictive to some extent.

One benefit of our SVM, PropheZy, is that it can cope with gaps in the data, as long as the “gappy variables” have reasonable amounts of data in them. In this instance, the gender and duration of membership data was very clean, but the date of birth and some of the “member interests” fields were gappy. PropheZy will ignore a variable completely if the data within it is too sparse or not predictive. In this instance, even the “gappy member interests variables” were all predictive, so we used them, even when they were sparse. Leavers with high and medium propensity to rejoin tend to have been members for a relatively long time, but also tend to be younger than the low propensity leavers. Also, in this case (much to the lip-licking delight of the finance people), the high and medium propensity to rejoin leavers tend to be in more expensive membership categories than the low propensity leavers.

Applying simple cost-benefit analysis to these results produced some straightforward conclusions; it is unquestionably worthwhile to undertake enhanced, telephone follow-up on high and medium propensity people, but borderline to go beyond the basic follow-up with the low propensity people. The workflow diagram below illustrates the follow-up process when enhanced by the use of predictive analytics using PropheZy. 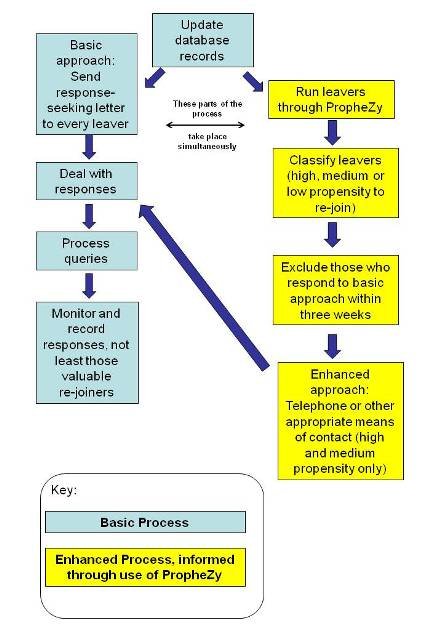 In this particular membership organisation, the average duration of membership is about ten years. When we started working on follow-up processes to generate rejoiners, we assumed in our initial cost-benefit calculations that rejoiners would be more flaky than other members and that we might get five years additional membership on average.

However, once we had three years history of follow-ups, we looked at the actual lapse rates for rejoiners and learnt some interesting things, as illustrated in Diagram Two below. 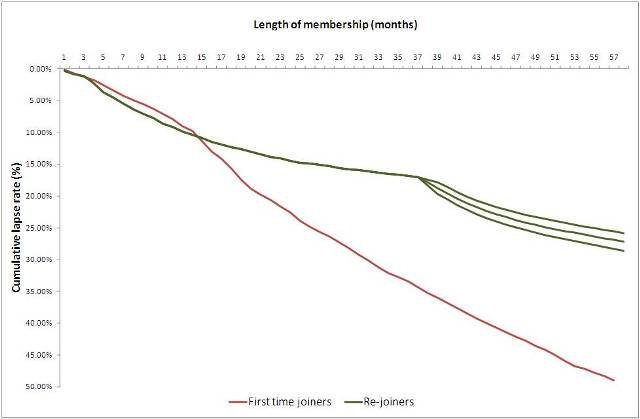 During the first 14 months or so of joining or rejoining, the lapse rates are quite similar, with rejoiners “relapsing” slightly more than first time joiners. But after that, the actual relapse rate for rejoiners is significantly lower than the lapse rates for joiners in the same period. This raised several interesting points.

It indicates that rejoiners are actually far more valuable than we had originally estimated, so we can rework our cost/benefit model with a smile. Secondly, it infers that proactive work with recent joiners might prevent some of that lapsing. So it is proving; we are currently working on sample proactive campaigns with recent joiners and getting highly statistically significant, positive effect on reducing leaver rates.

The next stage of our work is to see if we can boost the efficiency of the telephone follow-up work by using the SVM to predict which recent joiners and/or leavers are likely to be relatively easy to contact. Assuming this works, we can then optimise the effort/cost side of the equation in addition to the income optimisation described in this case study.

We call this case study Rust Never Sleeps because innovation is critical, otherwise civil society income erodes (or corrodes) away. Civil society organisations need to maximise the value of their supporter bases through economic, efficient, effective and innovative processes. In this case, statistical learning helped improve processes on all four of those counts.

Much of the analysis used in this study can be scaled and deployed in smaller as well as in large civil society organisations. We hope that most charities can learn useful things from this work and improve their financial position through improvements as a result of that learning.

Ian Harris is a Director and Mary O'Callaghan is a senior consultant with Z/Yen Group, a risk/reward management practice, dedicated to helping organisations prosper by making better choice (www.zyen.com). Z/Yen clients include blue chip companies in banking, insurance, distribution and service companies as well as many charities and other civil society organisations.