In this chapter we shall: 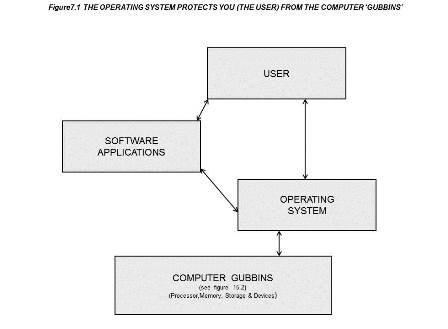 Most PC's today use a version of Microsoft Windows as the operating system.  Prior to that most PC’s used DOS as their operating system.  (Sorry MAC folks, but the numbers are overwhelming.)  Examples of operating systems you might come across at an organisational level (e.g. to run servers and networks) are Novell, Unix, Linux and Windows NT.

It could be argued that Web browsers (e.g. Internet Explorer, Netscape, Mosaic) are forms of operating system.  Some simple machines (e.g. prototype Network Computers - NCs) can run application software across the internet using web browsers alone.  At the time of writing, this approach to computing does not appear to be a viable alternative to conventional computing for most organisations.  However, the threat posed by web browsers as an alternative to the ubiquitous Windows has formed a key part of the Microsoft anti-trust legal action in the US.

There is another category of structural software known as utilities.  These are useful small packages that tend to do things you wish your operating system could do.  Examples include Lotus Screencam for recording the animation of your screens for later viewing, McAffee First Aid for finding out why your computer is going wrong, Quarterdeck QEMM for improving the memory capability of your PC, Symantec pcAnywhere for remote access, conversion programs; the list could go on and on.

If you only splash out on one utility package, it should probably be an anti-virus protection package.  The main products are McAfee, Norton and Dr Solomons, all of which offer subscriptions to keep your protection up to date and most of which will throw in some other utilities and/or bundled deals if you buy several licences.  Computer viruses are more than just a nuisance, they threaten the safety of your information, as well as having the potential to cause you inordinate stress, cost, effort and embarrassment.  Anti-virus software does not guarantee that you won’t fall victim to a computer virus, but adequate software protection together with sensible policies and procedures for avoiding receiving viruses in the first place minimise the risk. Those sensible policies and procedures for virus avoidance should include:

If you are nevertheless unfortunate enough to get (or believe you have) a virus on your PC, take the following sensible steps: