For five months, from January till the end of May, Z/Yen & Long Finance are delighted to welcome Lloyd Davis and the ‘Tuttle Club’ as our ‘Club in Residence’. The Tuttle Club is a loose association of people finding a way of working better together both online and off-line that has been meeting in London since February 2008, co-creating a Social Media Café for London

The Club is named after Archibald “Harry” Tuttle from the 1985 film, Brazil. You may remember the tagline of Brazil - “It's about flights of fantasy. And the nightmare of reality. Terrorist bombings. And late night shopping. True Love. And creative plumbing.” The hero, Sam Lowry, played by Jonathan Pryce, finds he has become an enemy of the state simply because he takes it into his own hands to correct an administrative error. In the film, Tuttle, played by Robert de Niro, is the rogue heating engineer out to solve people’s real plumbing problems “without filling out a 27b/6... Bloody paperwork.” He explains his motivation, “Why? I came into this game for the action, the excitement. Go anywhere, travel light, get in, get out, wherever there's trouble, a man alone."

Thus, Tuttle is a long-running conversation about interesting stuff with people who aren’t afraid to think about or work on radical new plumbing, such as new user interfaces, mutual distributed ledgers, artificial intelligence, financial innovation, scientific discovery, disaster relief, music, film, art, and where everything meets up in the Great Café that is London. There's no need to sign up - everyone's welcome at the Friday morning meetups which run from 10am to midday. There is no charge - though contributing a bit to the coffee bill is appreciated.

One of Z/Yen’s mottos is “sumus unus” and our simpatico feelings are reflected in another Harry Tuttle quote, “Listen, kid, we're all in it together.” Come along one Friday morning to 90 Basinghall Street. You’ll be very welcome. 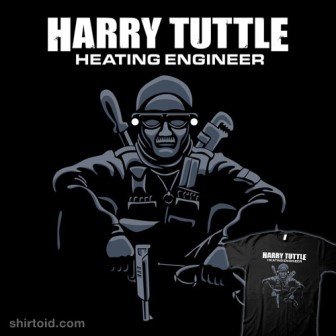