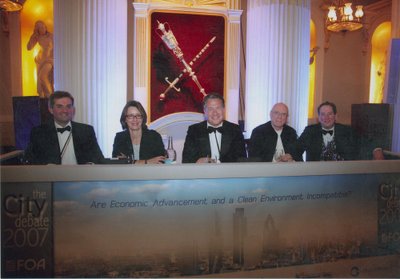 The somewhat awkward motion was "Green and Growth Don't Go" (together implied) though the invitation was "Are Economic Advancement and a Clean Environment Incompatible?". The audience was over 300 people from finance.

Professor Michael Mainelli’s opening statement to engage the audience was:

Anyone with a waistcoat like mine knows that Green and growth don’t go together. Tonight I am that kid who told you that Santa Claus didn’t exist. Green and growth is a lie-for-children alongside Santa Claus, the Easter Bunny, Nessie, immaculate conception, intelligent design and honours-on-merit.

Let’s face one inconvenient truth – this spinning rock we live on is currently over-run by a bunch of trumped-up naked apes who have three primate imperatives:

Three simple imperatives have led to 6.5 billion of the pests monkeying with the world’s thermostat. Way up in the white ivory trees, some brainy apes don’t fulfil imperative three very often. These apes sublimate their urges by dreaming up theories. Their current brainy theory: the moist fringe of this spinning rock is getting all steamy.

Do we know that CO2 levels are rising? Yes. Is there is a credible theory of global warming? Yes. Does this imply big changes over the next century? Yes. So what’s to debate? Well, other brainy apes down on the jungle floor sublimate their urges playing trading games and inventing theories about alpha returns. Jungle-floor apes have a theory: global warming can be stopped if everyone changes their economics a little bit. However, preventing global warming requires massive changes in economics and human nature within this decade, and human nature won’t change in time.

At Mansion House we can debate with real numbers. This is the City, not Westminster.

In 2004, gross worldwide emissions were about 7bn tons of carbon. Emissions are projected to grow to 14bn tons by 2054. For long-term stability, emissions in 2054 must be at or below today’s 7bn tons, and decreasing. Green and growth fans need a 7bn ton cut from “business as usual” by 2054. Socolow at Princeton identified 15 reasonable opportunities, called “wedges”, that would each cut 1bn tons by 2054. One wedge – convert 250 million hectares to biofuels, 1/6th of the world’s cropland. Another wedge – 2 million wind turbines on 30 million hectares, a Germany of wind turbines. Remember we need at least seven of these megaprojects in the next 47 years. They’re very realistic plans. Each wedge costs more than the GDP of China.

Global GDP was $44 trillion in 2005. Stern expects people to pay $440 billion each year to prevent climate change, $125 billion in the USA, $20 billion per annum in the UK. Starting this year. And the CO2 will still exceed 500 ppm. This is incredible, by which I mean it’s not believable. I don’t want a repeat of my Westminster experience on Nuclear Electric decommissioning. “Yes Minister, that number is possible, but certainly not probable!”

We are natural optimists in the City. We want to believe that we can do good; we can be green; the bad are punished and the good are rewarded; every story has a happy ending. We fixed the ozone layer; we handled sulphur dioxide well. But these weren’t 50-year, $22 trillion problems. You’ll point to emerging carbon markets we’d all love, but right now carbon credits are little different than the Catholic Church selling indulgences. And that leads us to human nature – sex, greed, fear and apathy.

We breed. By 2054, there will be 9.5 billion of us. Even if Britain stopped all GHG emissions, within two years China’s growth makes that effort worthless. What’s the point if Brazil, India, Russia and China just keep going?

Sure people care but CO2 is tasteless and odourless, while I must have missed seeing us stop a million children a year dying of preventable HIV and measles, 1 million of malaria, 1.5 million of diarrhoea? We are going to solve global warming, yet let 2.7 billion people live on less than $2 a day? Even Stern had to cook the discount rate to make global warming a better investment than the UN’s Millennium Development Goals.

If you believe that green and growth go together:

Our distinguished journalist will be erudite and persuasive, coming from a magazine with a readership determined to make money out of any investment fashion, a magazine that thinks invading Iraq was a good idea

After her you’ll hear from a gifted Westminster speaker who loves another excuse for them to raise taxes from us. Our speaker’s party peddles a real whopper for children - more tax is good for you and good for the country.

Human nature means that green and growth don’t go together, whatever lies for children politicians and journalists want to sell. Let’s be The City and tell it like it is. You must vote for the motion.

This House believes that Green and Growth don't go:

This House believes that the answer to climate change is technology and not restraining consumer demand:

This House believes that going nuclear is the answer to going green:

This House believes that US policy is the biggest single problem to combating climate change: